The following rules will allow you to play an actual game of True American. These rules do not always reflect what happened on the New Girl episode "Normal".

Players take turns trying to win moves in order to navigate the tables, chairs, and cushions which are your only escape from the molten lava floor. At the center of the game is a castle made of a bottle of alcohol and many beers. As players traverse the game area, they remove beers and drink them. Once all of the beers have been removed, the first player to reach the bottle of alcohol, finish their beer, and take a swig from bottle, wins the game.

The Castle is made up of one bottle of liquor and many cans of beer (you decide how many based on the number of players). The liquor is the King and sits in the middle of the Castle. The cans of beer are the Pawns and the Soldiers of the Secret Order. The Pawns are lined up in four lines radiating outward from the King. These lines of Pawns also signify the barriers between each zone. The game ends when all of the Pawns have been removed and a player drinks from the King.

There are four zones, each with five spaces where a player can stand. The center space in each zone is the only space where the Pawns can be taken and thus it is the closest space to the Castle. There are a total of four of these spaces. The spaces at the beginning and end of the zones are the farthest away from the Castle.

Before the game starts, determine how many beers total should be consumed and setup the Castle with those beers as the Pawns. Using the lines of Pawns as barriers between the zones; designate each zone, making sure to have 5 spaces in each zone as described above. Teams are optional.

WARNING Use caution when setting up your area of play. Alcohol and obstacles can be a dangerous combination. Play at your own risk. 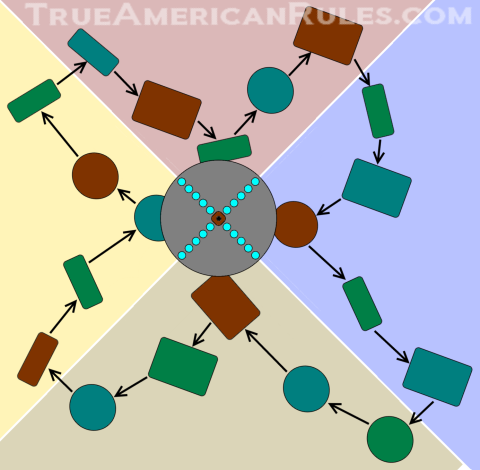 After setup is complete, players may have a shotgun contest to determine who has the first turn. If no player wisher to shotgun a beer, play rock-paper-scissors instead. To start the game, the winner of this contest yells "One, two three, JFK!" at which point all other players yell "FDR", grab a Pawn from the Castle, and retreat to any space.

Players must always have a beer in their hand and may not have more than three at any one time. Players may only take a Pawn from the Castle when they are in one of the four center spaces.

After all Pawns have been removed, the King is vulnerable. The first player to land on one of the center spaces, finish their beer and take a swig from the King, wins the game!

If you are caught without a beer or with only an empty beer, you lose. If you step in molten lava, you lose. To enter back into the game, drink one full beer and start on a space that the other players decide.